The IOV’s guide to licenses for private event videographers. 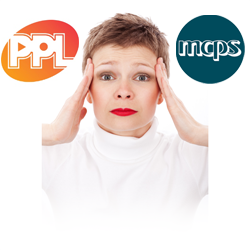 What licenses are available – and when do I need them?
There are generally two aspects of music that require copyright clearance; the rights in the Musical Works (music score and lyrics owned by the composers/publishers) and the rights within the recording (owned by the Record Company and the artist performing on that recording).

There are two separate licenses which cover the activity of recording/dubbing copyrighted music and recordings.

PLEASE NOTE: The licenses do NOT cover use for websites e.g Vimeo, YouTube, etc.

MCPS – ‘LM Licence’
If you are recording only music that is performed live (a band or choir etc), you will only need an MCPS Limited Manufacture Licence (LM Licence). These are issued by PRS for Music on behalf of the music publishers and sold on a per event/production basis. You might find that the band might also charge an additional fee for filming their performance.

PPL – ‘PFVD Licence’
If you are recording or dubbing music from a copyrighted music recording, you will also require a PPL ‘Private Function Video Dubbing Licence’. These are issued by PPL on behalf of the record companies and artists and are sold on a per copy basis.

Most wedding couples will want their favourite music dubbed on to their wedding film – and to fully Licence this can cost from as little as *£8.35 (see costs for each Licence type below) which would cover both aspects of copyright.

*Cost based on single copy of programme with less than 25-minutes of music – using PPL licences bought through the IOV at the 100-rate.

PLEASE NOTE  THE PPL TICKERS ARE NO LONGER SUPPLIED ANYMORE, A RECIEPT AUTHORISES THE LICENCES.

his licence is issued on behalf of the Record Company and the Performers, and enables you to record their music in actuality (such as that being played by a DJ at a wedding reception) and to dub music on to the wedding video in post production. The licence are written on your reciept and can be used anytime.

How much?
The cost of these licences varies according to the number of licences you purchase – but can cost from as little as £0.85 including VAT. Each copy of the production will require a separate PPL Licence.

How to buy your PPL Licences
These can be purchased through the IOV’s website – follow the link below:

This licence is issued on behalf of the Composers and Publishers, and enables you to record and dub their works (music score and lyrics). Each event or production will require a separate licence, and the cost is governed by the number of copies being made of the original – and the duration of music included.

How much? (prices correct as from their website January 2011)
The scales are as follows (prices include VAT):

Combined MCPS – PPL Limited Manufacture
MCPS have an agreement to sell PPL licences alongside their LM Licence and, in some instances, it may be more economical to purchase your licences this way (see ‘Price Comparison’ below). However, PPL licences sold as part of the LM Licence are only applicable to the production for which you are purchasing the LM Licence. You will also not be supplied with a holographic sticker as proof of licence. You are also limited to purchasing only 250 PPL licences per production from MCPS. If you want to produce more than 250 copies of a single production you will need to purchase additional PPL licences through the IOV or another PPL agent.

Please note, if you are purchasing just the MCPS LM Licence from the MCPS and do not want to include the PPL licences you must tick the appropriate box when going through their ordering system.

Price Comparison
For videographers who produce a number of events each year, with each having a small number of run-on copies, it may be much more economical for you to buy a stock of PPLs at the lowest rate and use them as and when. The licences available through the IOV are not dated and can be used on any number of productions/copies. Please note, you will still need to order an MCPS LM licence to cover the musical works – the cost of which will depend on the number of copies used and the duration of music (see scales above).

How to buy your MCPS LM Licences
These can be purchased direct from MCPS-PRS from their dedicated LM website – follow the link below:

Copyright Free
This is music produced specifically for use in productions, and generally comes with full clearance for use in all types of productions. You do not need any licence clearance to use them (subject to the terms of the producer).Whilst your client is unlikely to specify a copyright-free music track – using it is by far the easiest way to keeping clear of any copyright issues.

Production Music
Again, this is music specifically produced for use in audio visual productions. You obtain these albums by signing up to MCPS (click here) – and then the record companies that produce them will start to send you CDs. However, you still need to licence its use (depending on the application). In this instance MCPS licence both aspects of copyright – namely the musical works (music score and lyrics) and the rights in the recording (the rights in the recording and the artists’ performances). The rates will vary according to the use (media, geographical regions, application and amount of music used – normally in chunks of 30-seconds).MCPS’s blanket agreements – such as the Limited Manufacture licence – do include the use of Production Music. So, let’s assume you are recording a wedding and find some Production Music which your client likes or knows (very unlikely!), then you will only need the MCPS Limited Manufacture licence.

Commercial Music
With commercial music (that which is on general release – such as chart music old and new), the two aspects of copyright are covered by the two licensing bodies (MCPS and PPL). MCPS licence the musical works and PPL licence the rights in the recording and performing artists. With weddings and other domestic private events, the two bodies have developed general clearance licences – namely the Limited Manufacture Licence from MCPS and the Private Function Video Licence holograms (available from the IOV) from PPL. Buying both these licences will enable you to record and dub your client’s favourite music on their DVD.

Corporate & Broadcast Productions
Using Commercial Music on corporate or broadcast productions is completely different – and in most cases will be uneconomical and sometimes not possible. The MCPS Limited Manufacture licence excludes this use, so you will have apply to them via their website (click-here for more info).

You will then have to approach the record companies direct to obtain clearance for the rights in the recording. That’s never an easy thing! Sometimes the artist might have a moral objection to their music being used in association with a company (for instance, say you were doing a promo for an animal experimentation company).