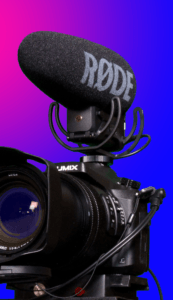 Choosing the right microphone is always difficult. For most of us it is usually a matter of balancing cost against performance and audio character. With professional microphones there are plenty to choose from with a decent pedigree. But when it comes to selecting a small mic to complement a DSLR there is less choice and, for the most part, you are really looking at ‘domestic’ or semi-pro standards. So that’s where Rode steps up to the mark.

Rode’s latest version of their popular VideoMic Pro was released earlier this year (2017) with ‘+’ added to the name. 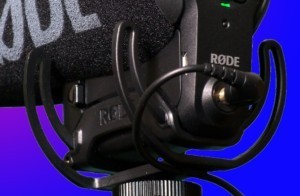 The implementation of the built-in Rycote Lyre suspension system has also been improved so there is virtually no transmission of audible physical sound or bumps to the microphone. There are two levels of bass cut built-in (at 75Hz and 150Hz) as well as a treble boost – and you can amplify the mic’s output by 20dB if your camera input is not very sensitive, or reduce it by 10dB if the output is too hot. I found that leaving the mic output with zero boost was fine with my FZ2000 – and even for quiet speech at about 50cm I had to reduce the camera’s input gain setting by 4 or 6dB to get the levels down. It is slightly more bulky than the previous version, due mainly to a bigger wind-shield, with an overall length of 17cm – so it is not for covert filming ! Being mainly plastic it is fairly light-weight (122gm net) but with the battery installed it feels solid enough. A nice ‘more professional’ touch is the inclusion of a Sennheiser-type locking 3.5mm jack socket for the output, giving extra security if you are using it off camera – although the supplied short camera audio cable does not have locking jacks. The one thing that people have complained about is that the jack output plug (even the right-angled one supplied) sticks out beyond the back of a DSLR camera so you can’t get your eye to the viewfinder. Easily solved, though, by mounting the mic on a short cold-shoe bar which you can buy or make. The cold-shoe foot also has a threaded socket so it can be mounted on conventional photo equipment or a hand grip or boom with an appropriate thread adaptor. 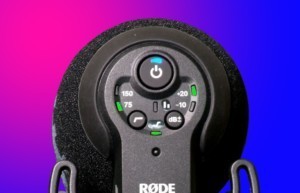 Audio Quality The first thing I noticed was that it has very low self noise. There is no annoying hiss in normal circumstances. You will always get some circuit hiss from a powered mic – and this will become very noticeable if you crank up the levels too much in any part of the audio chain. I was surprised to find that engaging the 20dB boost on the mic did not increase hiss levels as much as I expected. So, if you have a camera with a low audio sensitivity you will probably be better engaging the 20dB boost on the mic and turning down your camera input gain. Fortunately the normal output of the mic (rated 21mv) was ample to drive my camera’s audio input so I had no problem with hiss. Nor was I expecting any since the mic has a quoted signal to noise ratio of almost 80dB and an internal Equivalent Noise of only 14dB(A), which is pretty good. 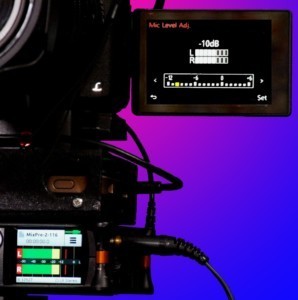 Never mind the specs. What does it sound like ? Straight out of the box, with no bass cut or treble boost applied, it has a warmish fairly full sound with plenty of bass. In fact it can sound a bit muffled in some circumstances, depending on positioning. This can be more evident when using the mic close up – because of the proximity effect – but at normal distances (arms length for interview or on camera) the sound was fairly natural but not as open and sharp as obtained with a professional Sennheiser shotgun. (Check out the video test at 12m 15 secs to hear the mic ‘flat’ and recorded direct to camera). As with all mics, you need to get to know how they respond in various situations and with various settings and with your particular kit. That’s why I carried out a series of tests with the mic in various positions and with the different on-board bass cut and treble boost combinations applied. I did these tests in a quiet ‘soft’ room with very low room reverberation so that I could hear the difference these settings made to the audio before going out into the real noisy world. You really do need to know how the mic’s cuts and boosts affect the true sound before you apply them on location. 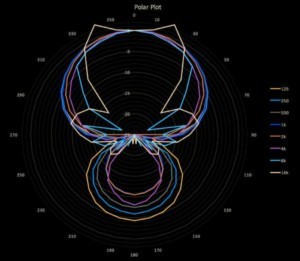 Directionality Generally speaking you need a long shotgun to give you the greatest directionality. So we are somewhat limited by the physics here. Nevertheless, Rode have done a good job in tailoring the polar pattern to give good side rejection at most frequencies. As with all directional mics beyond cardioid there is always a ‘rear lobe’ of sensitivity. The more directional the mic the bigger the rear lobe. The good news is that directionality is also frequency dependent – the higher frequencies are firmly directed towards the front but the bass frequencies cannot be reined in so you will get more low frequency coverage at the back. That is why applying some bass cut can help. Rejection of voice frequencies from the side and rear is quite good. Only a cardioid mic would not pick up from the rear.

Frequency response Unless we are recording music or certain wildlife, a full frequency response is not likely to be critical. It is how the mic handles the frequencies that determines how it sounds. Rode quote the frequency response as 20-20,000Hz but the frequency curve for this mic looks a little odd since it has a significant (+5dB) peak at about 4kHz before you apply the treble boost ! But by the time you get to 5,500Hz this has dropped by almost 9 dB to about -4dB… and continues to fall off more gently thereafter (see graph). The peak is presumably to improve clarity in the human voice and can be heightened further by switching in the mic’s treble boost, although to my ears the boost can sometimes sound a bit harsh with its +7.5dB peak, but this does bring frequencies beynd 5,500Hz up to reference level (0dB) before they plummet sharply in the upper ranges. Unlike some other mics of this type, the Rode has a good bass response (hence the need to include bass-cut switching). For general outdoor recording I normally keep a small amount of bass cut switched in on all my mics at around 40-80Hz. This not only helps to remove traffic rumble and unwanted environmental noise but also reduces handling noise.

Wind and unwanted sounds This mic is on a par with others I have come across in terms of sensitivity to wind. It is not over sensitive to ‘wind’ but wind noise will be apparent with any foam wind-shield on any microphone. Applying a Rycote fur wind cover will improve things a little but the ONLY way to quell wind noise on any mic is to use a wind cage ! You will also get unwanted airborne sounds from your camera being picked up with any mic which is mounted directly on a small camera – simply because the switches, servos and fan are so close to the mic. To reduce this you could put the mic on a short bar off to the side of the camera – or ideally have someone else hold it ! IOV members will be well aware of that !

Uses Whilst Rode have designed this primarily as a small(ish) on-camera mic, aimed at DSLR and small video camera users, it is really much more versatile than that. It could double as an out-of-shot interview mic on a hand grip or boom, or may be at a push even used for budget narration. OK it will not replace specialist mics but I suspect many people would not appreciate the difference if this mic is set up and used ‘properly’ and a bit of post production tweaking applied. You need to listen to the direct-to-camera voice samples and judge for yourself.

Wrapping up Overall a nicely executed compact mic for on-camera use with a warm, if sometimes slightly muffled bassy sound. It has low inherent noise plus excellent physical noise isolation with the built-in Rycote Lyre suspension. The electronic switching on/off via the audio cable, triggered by switching your camera on or off, is brilliant. But even without this, the 100 hour battery and AA option give you the confidence that you should never be without power for this mic. I intend to keep it in my DSLR camera bag all the time – just in case I need to shoot video !   Chris North©2017 Part Two (Nov 2017)

You can listen to Chris North’s tests of the Rode VideoMic Pro+ in his video, in which he also compares the Rode with a professional Sennheiser MKH60 shotgun mic and a basic Sennheiser lapel mic so you can make your own judgement. For full details and specifications of the Rode VideoMic Pro+ see the Rode Web site  :  https://www.rode.com/microphones/videomicproplus Download Article as PDF Review Part 2 review Part 3 21 Nov 2017  : 4.30pm